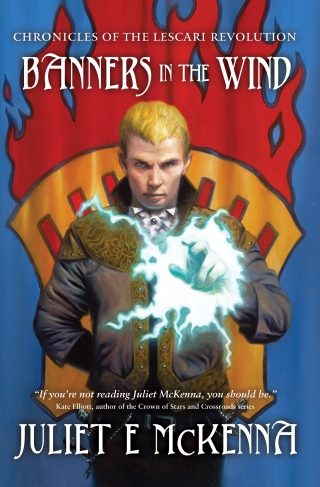 A few stones falling in the right place can set a landslide in motion. That’s what Lescari exiles told themselves in Vanam as they plotted to overthrow the warring dukes.

But who can predict the chaos that follows such a cataclysm? Not Tathrin or Aremil, for all their studies. Not Branca or Failla, for all their intelligence gathering to further the revolution’s cause. Not even the Archmage of Hadrumal or the Emperor of Tormalin who have been quietly observing from the sidelines, in case their own interests demand intervention.

Some of those from Lescar and beyond will survive against all the odds; friends and foes alike. Many hopes and alliances will be shattered beyond repair. Unforeseen consequences bring undeserved grief as well as unexpected rewards or perilous defiance. Wreaking havoc is swift and easy. Building a lasting peace may yet prove an insuperable challenge.

In this final volume of the story, I must consider considered how much still remains to be won or lost after the battles are won, lost or inconclusive. At the outset, these conspirators, the exiles like Tathrin, and those born to exiled parents like Branca, and the rebels like Failla and Reniack who’d endured the worst of life in Lescar were united by common purpose. Now their different priorities risk shattering their previous unity. All the while, the dukedoms and dukes or their heirs and widows still remain, ready to seize any opportunity to reclaim their power and privilege.

A lasting peace must be found. As is all too apparent, anarchy gives licence to humanity’s basest instincts. Will this force a compromise, born of the necessity to stop vengeful slaughter? If so, can such a settlement ever hope to hold? Reconciliation requires commitment on all sides or it will surely fail, leaving everyone mired in a conflict even worse than before.

But the conspirators and rebels discover there is only so far that they can go, only so much that their revolution can achieve. Now Lescar’s future depends on every individual playing an active part in mending their society and healing age-old wounds. But that’s an awful lot to ask of people when the personal toll leaves even those most loyal to the cause wondering if this price is truly worth paying.