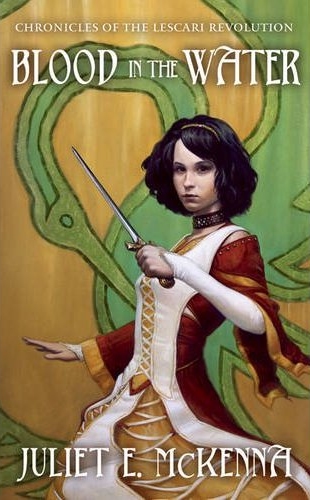 Tathrin and Aremil, Branca and Failla: these four of the exiles and rebels who are determined to bring peace to Lescar discover the true cost of war in this book. Their courage and friendships are tested to breaking point. Some will pay a heartbreaking price for their boldness. Who will pay the ultimate price?

The dukes of Lescar aren’t about to give up their wealth and power without a fight. They won’t pass up any chance to advance their own interests either, if one of their rivals suffers in all this upheaval. Their duchesses have their own part to play, more subtle but no less deadly. Litasse of Triolle won’t give up without a fight. After all, where else could she go?

Planning a revolution is all very well in principle. Sooner or later though, there will be blood and violence if the other side cannot be persuaded to yield. The dukes have never yielded to each other so they’re not about to surrender to a rabble of exiles and hirelings. So this second volume was always going to be about the battles; another writerly challenge to relish and incidentally, an excellent way to avoid the second-volume doldrums. This is the first trilogy I’ve written and that’s a pitfall I’ve been looking out for.

Of course, much of fantasy fiction is built around warfare. I could give countless examples. Indeed, ask someone who doesn’t read epic fiction what the genre’s about and they will often cite battles and bloodshed, mostly with disapproval, for trivialising suffering and loss in a world where such violence is still all too real. That very reaction proves they really don’t read fantasy fiction, classic or current. After serving on the Western Front in the Great War, Tolkien was very well aware of the appalling costs of warfare, on personal and broader levels.

But such mistaken impressions of the genre don’t negate that crucial question. How does a fantasy writer use warfare as a backdrop or a central theme without trivialising the destruction of innocent lives and the inconsolable grief that follows? The mental and physical wounds that the battle-scarred and battle-shocked will carry for years after?

So in this second volume, I need to show the true, grisly cost of hand-to-hand warfare, as well as the impact of such upheavals on the non-combatant populace. I must explore how wars are fought by far more people than sword-wielding heroes on horseback. How guilty complicity can reach far beyond those actually shedding blood. How such travail can reveal an individual’s essential character, the good as well as the bad. Let’s not forget the very best of humanity can be found amid the ugliness of warfare. While contemporary fantasy writers have a responsibility not to gloss over regrettable evils, the conventions of our genre also allow us to celebrate heroism and valour.