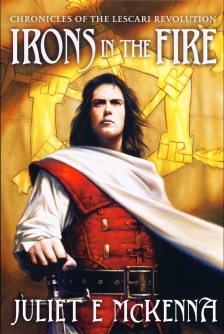 Lescar is a country mired in ancient grudges, with shifting ducal alliances persistently undermining any progress towards peace. Those Lescari living in exile think they’re helping by sending goods and money to their suffering kith and kin but that only sustains this on-going strife.

Some exiles understand this, like the young scholars Tathrin and Aremil, in the distant city of Vanam. Can they do anything to prompt lasting change? Perhaps, if they can somehow subvert the role of trade and finance in Lescar’s wars, as explained by Gruit, the venerable wine merchant who fled Lescar in his youth. If they can make common cause with the likes of Reniack the rabble-rouser, who escaped just before his own duke’s militiamen hanged him.

They will also need to enlist the support of those Lescari nobles who turn to scholarship rather than risk politics, such as Lady Derenna. They must contact those brave men and women still living in Lescar, priests like Master Ernout and his niece Failla, who conspire to save the next generation from the worst of their own suffering. And finally, to turn any of their plans into action, they’ll need soldiers to fight the dukes’ militias. Where will they find those and more crucially, the men to lead them into battle?

Revolutions are fascinating chains of events, historically speaking, so often bringing people with very different motives and desires together in a common cause. I soon realised I would be dealing with a broad cast of characters in this trilogy, not least because I had already established the intractable nature of Lescari warfare, thanks to so many contributory elements, in the country itself and abroad. Then I wanted to make sure I showed all sides of the story. We have to see the struggle from the ducal point of view, though that didn’t necessarily mean being sympathetic to the dukes. Even if Duchess Litasse of Triolle is in some ways just as much a victim of this strife, her wealth and comforts are sustained by merciless henchmen like Karn.

Working with six point of view characters, with at least the same number again of significant players in those different narrative threads, has proved both a tremendous challenge and very satisfying indeed for me as a writer.

Then there’s the magical challenge. Because one of the abiding problems for epic fantasy writers is not having magic solve all the problems. How satisfying would The Lord of the Rings have been, if Gandalf had whistled up an eagle for Frodo to take a literal flight from the Shire and drop the One Ring into Mount Doom from 10,000 feet? Not very.

Fortunately, I’ve already established the Archmage’s Edict forbidding the use of wizardry in warfare in Einarinn, on pain of his extreme displeasure. I did this, at least in part, to anticipate readers wondering ‘why doesn’t Planir just sort it all out?’ whenever the Lescari strife is mentioned. But the elemental magics of air, earth, fire and water aren’t the only enchantments in this world. There’s Artifice, the ancient and subtle magic which intrigues the scholars of, oh yes, Vanam’s university, where Tathrin and Aremil were students. The wizard city of Hadrumal has never claimed authority over aetheric magic…

Successful revolutions rely on many things. High on any list are logistics and communications. Artifice is a magic of mind speaking to mind. Will this prove to be the vital advantage for the rebels? But magic is not nearly so straight forward when even those like Branca, Aetheric scholar of humble Vanam origins, are barely half-trained in Artifice and aetheric magic itself is barely half-understood.