With Darkening Skies now out in the UK and US, naturally I’m keeping an eye open for reviews. This week, I’ve seen mentions in SFX’s June 2012 magazine (#221) and in the Morpheus Tales online supplement. (Both well worth reading for a lot of other good stuff by the way).

This is very encouraging from a publicity point of view. But… amongst her other observations, Sandy Auden in SFX says:

The author has been attentive to the details too, especially in the smooth transitions between story threads. It’s the details that are the main drawback though. McKenna’s characters agonise constantly about their problems and it kills the pace.

Whereas, in the Morpheus Tales supplement, Adrian Brady says:

McKenna’s writing is excellent, both managing to evoke a rich world and characters, and moving the plot on speedily to keep the excitement levels raised.

So who’s right? And am I going to throw a writerly strop or mope ostentatiously about this insult to my misunderstood genius, either online or in public? Er, no. I don’t think I could do either and keep a straight face, not even for the entertainment value of seeing other people’s astonished reactions.

Besides, they’re both right. That’s how the story worked for them and they’ve both been objective, honest and courteous in expressing their opinions. That’s what a good reviewer does.

I also know how hard I worked to balance insight into the characters with the overall narrative pace as I wrote the book. I know I did the very best job that I could. Just as I knew at the time, I’d get that balance right for some readers and … less right for others.

You see, I’ve been here before. Back when I wrote Southern Fire, I delivered it to my editor with trepidation, explaining that of my test readers, one found the opening rushed, one found it too slow and one found it just right. Who was correct? They all are, he told me. It all depends on your perspective and readers’ reactions stem from a great many things beyond the actual words on the page. As a writer, you can only do the best job you can. So that’s what I do.

Besides, they both agree on one key thing. Adrian Brady says, ‘I’m looking forward to the third novel with whetted appetite,’ while Sandy Auden offers ‘It’s not clear what they’ll agonise over next though – after conclusive events here, book three could go anywhere.’

Writing the second volume of a epic fantasy trilogy that leaves long-standing genre readers with no clue what happens next? Now that’s a result. So as soon as I’ve done – and recovered from – Eastercon, I’ll get on with writing Defiant Peaks, all the more encouraged and inspired.

Well, the book (first chapter and more info here)was going to be published on the 28th February (US)/1st March (UK) and I was going to be at the 9th Phoenix Convention, Dublin (known to its friends as P-Con) from the 2nd -4th March. So that immediately offered me the chance to celebrate the new book among friends, fans and book lovers.

Then in a wonderful coincidence of timing, it turned out that CE Murphy (Catie to her friends) also had a book published on 1st March, namely ‘Raven Calls’, the seventh of her excellent urban fantasy series, The Walker Papers.

So we decided on a joint launch party at the Irish Writers Centre, a glorious Georgian building on Parnell Square and P-Con’s new home. Do we qualify as Irish Writers? Well, my paternal grandfather left Ireland in 1923, heading for the UK, and Catie’s grandfather left around the same time heading for the US. Catie’s family returned to Ireland in 2005 and now live in Dublin. My father lived in County Laois till last year. Good enough.

It was a great start to the convention weekend. We shared a few glasses of wine and Catie and I shared a few thoughts about our books. For a start, although this is my fourteenth book and her eighteenth, yes, we agreed, every publication day is still really exciting. We talked a bit about writing in extended series, how it’s great to see characters and ideas develop – and how you casually write half a line in one of the early books that comes back to bite you on the ass years later. We both have experience of that.

We swapped notes on our different approaches to magic. Joanne Walker is a shaman living in modern-day Seattle; her magic is fluid and mysterious, both enabled and limited by Joanne’s own imagination. So Catie’s drawing on Native American and Irish myth (her heroine is of Cherokee and Irish descent), which opens up a tremendous amount of possibility for finding similar elements in both cultures (there are more than you’d think!) and massaging them into story arcs. The magic in her stories is less elemental than fundamental: shamanic practitioners believe everything has a life force and a purpose, and so much of what Joanne does is activating and working with that force and its natural purpose.

I’m writing in an entirely secondary world with magic based on the four classic elements of air, earth, fire and water and wizards who take an almost scientific approach to their studies. So I’m drawing on our own world’s history of science as well as modern sources like experimental archaeology to find plausible justifications for the spell effects I’m devising. If an earth wizard needs to find out how old something is, he can use his innate affinity with for example Carbon 14. Except of course, that would be on a good long list of words I cannot use without wrecking the fantasy atmosphere of my secondary world, along with ‘diatom’ and ‘isotope’ and so many others. We agreed the challenges of writing can prove quite unexpected.

It was a great evening, especially because I could share my admiration and enjoyment of Catie’s books, and she’s a fan of my writing – we both read outside our particular sub-genre for relaxation and enjoyment. Since one of the most toe-curling things about a book launch is being expected to praise your own work, it was so much nicer to be enthusing about a good friend and fellow writer’s work instead!

Incidentally, if you fancy a trip to Dublin next spring – and need some sort of excuse – plans are already in hand for P-Con X, where the Guests of Honour will be Cory Doctorow and Sarah Pinborough. Keep an eye on that website for updates!

So if Darkening Skies, the second book of The Hadrumal Crisis trilogy is published in the US on 28th February and in the UK on the 1st of March, what happens on this leap year day of 29th February?

Well, for a start, you can go and read the opening chapter, wherever you might be, over on the Solaris Editors’ Blog.

I’ve also done an interview with the Solaris chaps talking about this book and trilogy as well as what I write and read more generally. There’ll be a few more guest blog spots here and there over the next week or so as well.

In addition, I’m celebrating along with the fabulous and talented CE Murphy, whose new book Raven Calls is also published this week, with a joint launch party at the Irish Writers Centre, Parnell Square, Dublin on Friday evening, by way of kicking off the fun at P-Con IX where I’ll be spending my weekend along with an array of great writers, great fans and many good friends. I’ll be discussing issues of gender in writing and publishing, internet piracy and the erosion of writers’ rights, and running a writers workshop alongside George Green of Lancaster Uni. By way of lighter topics, a group of us will be tackling ‘I didn’t get a letter from Hogwarts so I left the Shire to become a Vampire Jedi: how do authors avoid writing this book?’

Next week, when life calms down a bit, I’ll see about a book giveaway competition. Why so busy? Well, apart from the above, I’ve been working on a redesign of my website, which will see a whole new blog-based set-up, with a fair bit of additional background material about my writing added to what’s already been available, along with my articles, review, diary and other such stuff. At that point, this interim blog will go into mothballs.

I am indebted to Cheryl Morgan for all her help with this website relaunch, at the same time as she’s been tackling the publication angles for the forthcoming Further Tales of Einarinn ebook. There’s just a few final t’s to be crossed there and that’ll be available soon. Then we finalise an ebook of Turns & Chances, the Lescari Revolution novella. Meantime, of course, the Lescari Chronicles and both of the Hadrumal books to date are available in the eformat of your choice from your preferred supplier.

Right, I had better get back to finalising an Einarinn Gazetteer for the new site… 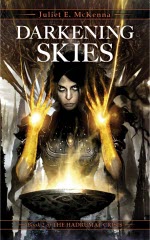