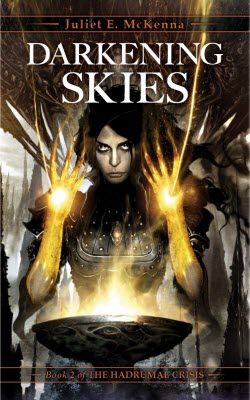 In the Caladhrian barony of Halferan, Captain Corrain is hailed as a hero. Planir, Archmage of Hadrumal had refused to send magical aid to the Caladhrians, seemingly indifferent to their sufferings at the hands of corsair raiders. Determined to see the corsairs who’d enslaved him defeated, Corrain refused to accept this. Enduring physical cost and personal loss, he finally found a wizard willing to help; one who owes no allegiance to Planir.

Corrain knows all that praise will turn to anger if the Caladhrians learn what really happened. The wizard who supposedly saved them has claimed the corsair island for his own. The raiders haven’t been routed, only confined. No one knows what that wizard intends for his new domain.

Privately, Corrain has good reason to fear the worst, as he confides in Lady Zurenne of Halferan. He knows he can trust her. Still more perilous secrets now bind the two of them together. Zurenne must tread very carefully lest scandal sees her daughters removed from her care with all her rights as their mother set aside.

Will Archmage Planir finally act? If the mainland barons don’t yet know the truth, this disastrous turn of events cannot be concealed from Hadrumal’s mages. Now Planir’s leadership is being openly questioned, even challenged, despite the magewoman’s Jilseth best efforts. Surely the time has come for Planir to enforce his authority? How better to do that than by crushing this upstart defying Hadrumal’s age-old edict against wizardly warfare?

Still, Planir watches and waits. That corsair island lies on the outer fringes of the Archipelago’s northernmost reaches. Aldabreshin hatred of magic is so intense that surely the neighbouring warlords will not tolerate such a polluting presence so close to their own dominions. But will they act soon enough to suit the other Element Masters and Mistress of Hadrumal?

The Aldabreshin warlords are watching the skies. The portents which they observe govern all their choices and actions. The heavens are looking increasingly ominous with a conjunction of the stars approaching that’s seen only once in the longest lifetime. Will that force the warlords to drive this solitary wizard from the Archipelago? Can their armies possibly succeed against his magic?

Writing this second volume drew me even deeper into the elemental magic of Einarinn, into the sources of wizardry’s power, into the way the mageborn understand their affinity and most particularly into the effects that having such a talent can have on an individual’s character and behaviour. I also realised how important it was to show the other side of that particular coin; how thoroughly unnerving magic must seem to the mundane born.

The book also takes us back to the Archipelago for the first time since I wrote the Aldabeshin Compass sequence. Revisiting that culture and its people, good and bad, was fascinating.